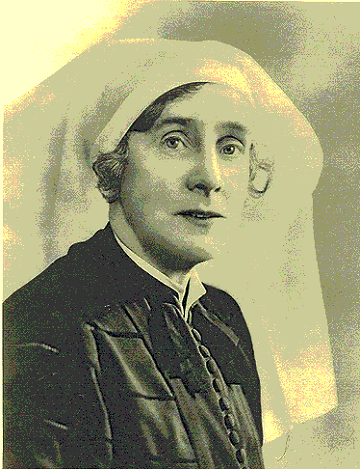 On 15 November 1923 a group of ladies, much encouraged by their Rotarian husbands, called a meeting at Herriott’s Turkish Baths in Deansgate, Manchester, for the purpose of setting up a club on Rotary lines, and 27 ladies attended.  At this time in Britain, there was still a marked divide between the comfortably off and the downright poor, and there was virtually no welfare or social services at all, so there was plenty of scope for voluntary work.

A committee was set up to contact the wives who had not attended; the chairman of this committee was Mrs Margarette Golding and the secretary/treasurer was Mrs Mabel Nixon.

As a young woman Margarette Golding, trained as a nurse, becoming a sister at the London Hospital for Tropical Diseases.  She served as a nurse throughout the First World War.

She was also a shrewd businesswoman, joining the firm known as the “Nurses Outfitting Association Ltd.” in Stockport, Cheshire when the War was over.  This was a company run by nurses for nurses.  In 1919 Mrs Golding took over as Managing Director of the company, a position she held until her death.

In 1928 the first Inner Wheel District was formed, then the Association of Inner Wheel Clubs and in 1967 International Inner Wheel was formed.  Today there are over 100,000 members worldwide in 103 different countries.

There are over 15,500 members in GB & I with Clubs in 29 districts.  It is now one of the largest women’s service organisation in the world and has representation at the United Nations.

Inner Wheel District 9 was formed on 4th October 1944 and consists of 11 Inner Wheel Clubs with over 300 members. Our Clubs are located in parts of Oxfordshire, Buckinghamshire and Berkshire.